Stranger Among Us is episode eight of The Mysteries of Alfred Hedgehog.

When Ricardo Rabbit refuses to perform in Gnarly Woods on the night of the Spring Festival due to his fur changing color, Alfred and Co. are on a time limit to determine what happened.

As Camille hands over the tickets promised to the other girls for Ricardo's upcoming concert Cynthia and her cousins show up, claiming that he won't be performing because something happened. Before they leave, she also points out that Camille will have to provide a bunch of refunds and mockingly laughs at her. The trio are suspicious about this, but when the girls get angry at the very idea, they run for Hedgequarters to avoid dealing with it.

Upon arrival the trio see a stranger already inside. Milo attempts to keep them safe from the "imposter" but Alfred identifies him as Ricardo by the way he responds- but he asks him why he has turned brown. Ricardo admits not to knowing, but he won't be performing like this. Camille pleads with him to reconsider if they can determine what happened, and while he still isn't too sure he agrees to give them a chance. Alfred asks him to tell them about the past few days and he thinks back, recalling that while training for the concert he caught sight of a few brown hairs. He pulled them off and continued without thinking about it, but after a shower he found brown patches on his fur, and no matter how much he scrubbed they wouldn't come off. By the time he finished he found even more.

The trio decide to start investigation at his House in hopes of finding something out, observing his various food items and the water. As Alfred is observing it, Milo and Camille stand nearby and play with his large mirrors nearby- until Cynthia shows up again to make fun of Camille and wonder what they are doing. After taking off, Alfred notices she accidentally grabbed the sample water rather than her own and they run after her, but before he can get it back, she falls, causing the water to spill out. But nothing happens and they deem it unimportant after all.

Back at Hedgequarters, Alfred examines the food but still can't find anything, and by now the frustrated Ricardo decides to leave for home until Camille stops him, reminding him that they still have an hour before he was set to go on stage. Alfred asks Ricardo to show them where he was practicing in hopes of finding something and with a bit of force, they manage to convince him to come outside and show them.

As they investigate, Lumas suddenly shows up to confront them, and Ricardo hides in a nearby bush. Lumus circles the remaining trio and demands to know why they are there, causing Alfred to quickly explain that they had to investigate the spot where Ricardo trained. He is excited to hear this when they claim he is with them, but as he doesn't see him anywhere he takes off.

Alfred shows confusion at this and decides to take a picture of Ricardo as he hides, and as he observes the picture it slowly begins to don on him and they return to Hedgequarters. Alfred asks Ricardo about his species and Ricardo responds "Snowshoe Hare", and Alfred looks this up to determine what happened. As a defense mechanism, Ricardo's fur automatically changes during two of the four seasons to keep him safe, which is why Lumus wasn't able to see him hiding in the bush. His brown fur helped him blend in.

As everyone is enjoying the performance, Cynthia demands to know how Camille managed to convince him to go through with it, but she simply claims it was very easy.

Our first clue are food samples.

A shower water sample is our second clue.

Ricardo is camouflaged in bush, is our last clue. 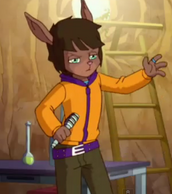 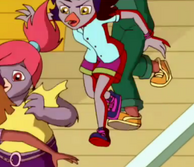 Note the second ticket matching the poster nearby

Community content is available under CC-BY-SA unless otherwise noted.
Advertisement