Mysteries of Alfred Hedgehog Wiki
Register
Don't have an account?
Sign In
Advertisement
in: Characters, Females, Pre-Teen,
and 5 more

Cynthia Payne is a character in The Mysteries of Alfred Hedgehog, and the daughter of Mrs. Payne. She is snobby and quick to lose her temper or throw a tantrum whenever she's annoyed, and pretty egotistical.

She can often be found with her friends and cousins Tina, Louise and Gabby. She is often at ends with Alfred Hedgehog and his friends, but on occasion has been forced to turn to them for help.

Cynthia is a ten year old about the same height of Alfred and friends. Her feathered skin is auburn colored with a tan marking around her neck reminiscent of a necklace, and short, dark yellow straightened hair cut in a bob, with her tail feathers being the same color but streaked with purple. She has an orange beak and a blue tongue, with her eyes being Carolina-blue.

Casually she wears a pale pink tunic with a mauve belt to match her beret, pale pink flats, and black leggings.

For bed, Cynthia wears a pale pink blouse with hot pink and mauve detail, knee-length pants, slippers, and a frilly eye mask. For winter she wears a pale pink jacket with a mauve pocket, mauve pants, and pale pink boots, along with pink gloves and a mauve hat.

When swimming Cynthia wears a light pink dress with a hot pink stripe going around the center and shorter hot pink leggings.

Cynthia is a typical spoiled girl who expects the best and talks down to others who can't compete or may serve as competition for her. She is childish whenever she doesn't get her way and she has an over-inflated ego and believes that she is destined for greatness. While she may be talented and have genuine skill, she's very clumsy and often lets her pride or greed get the better of her. She can be a sore-loser and she has no problem claiming foul play or taking advantage of a situation if it will benefit her. She is also shown to be fairly feminine and takes great pride in her appearance, showing a slight shallowness. She likes many girl activities such as going shopping, cheerleading, the color pink, and like most of the other girls in Gnarly Woods she really likes Ricardo Rabbit and Razzy. However, she is also shown to play many rough sports.

It is obvious that she only cares about herself, and unless there's a reward or a threat to her, she won't be likely to help out. While she isn't Alfred's and his friends favorite person, the two groups tolerate each other enough to speak on civil terms if they have to, and on rare occasions she's capable of speaking to them on casual terms and providing help. 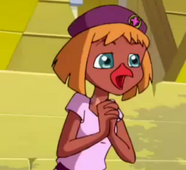 Foam on her head

Cynthia falls in the pool in "Bubble Trouble." 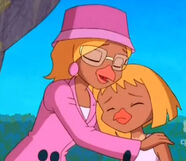 Cynthia being comforted by her mother as she cries
Community content is available under CC-BY-SA unless otherwise noted.
Advertisement